Robin Hood’s Bay lies in the ancient parish of Fylingdales. The name itself is believed to be derived from the Old English word ‘Fygela’ which meant ‘marshy ground’. The first evidence of man in the area was 3000 years ago when Bronze Age burial grounds were dug on the high moorland a mile or so south of the village. These are known as Robin Hood’s Butts. Some 1500 years later, Roman soldiers had a stone signal tower built at Ravenscar about the 4 th century AD. The first regular settlers, however, were probably Saxon peasants, followed by the Norsemen. The main colonists of this coast were Norwegians who were probably attracted by the rich glacial soil and ample fish, and this is how they survived by a mixture of farming and fishing. The likely original settlement of the Norsemen was at Raw, a hamlet slightly inland, which helped to avoid detection by other pirates.

After the Norman Conquest, the Manor of Fyling was given as the spoils of war to one of William the Conqueror’s relatives, Hugh of Chester. Eventually, it passed to the Percy family who gave the land to Whitby Abbey.

The first recorded reference to Robin Hood’s Bay has now been identified to 1322-1346, in a letter from Louis Count of Flanders to Edward III,  pleading for the return of his ship which was taken to "Robin Oode Bay", by the people of England (perhaps the first reference to piracy in the Bay !).  The next reference was in 1536 by King Henry VIII’s topographer, Leland, who described ‘a fischer townelet of 20 bootes with Dok or Bosom of a mile yn length’. By now the cliff settlement had grown larger than the inland settlement, probably because they felt more secure from piracy and because it would be more convenient to walk from the boats. By 1540, the village was said to have fifty cottages by the shore (a large settlement at that time) so we can speculate that the present village originated somewhere in the 15 th century. In 1540, the chief tenant was Matthew Storm and his descendants still live in the area. At the dissolution of the monasteries in 1539, the land passed to the King who sold it to the Earl of Warwick. The Cholmleys and then the Stricklands became the final ‘Lords of the Manor’ 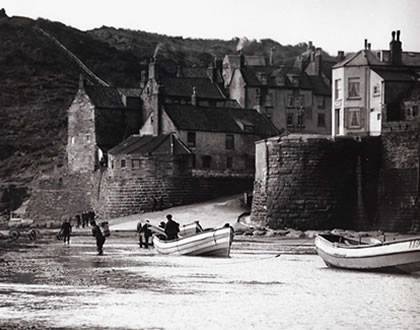 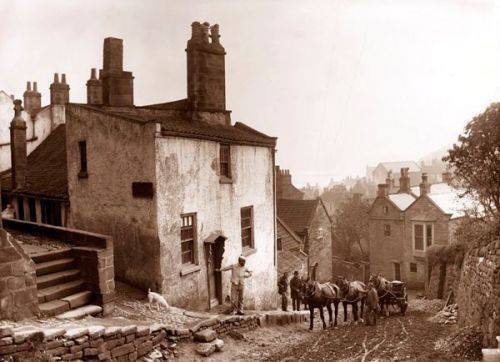 The actual origin of the name remains a mystery. There is not a scrap of evidence to suggest that Robin Hood of Sherwood Forest folklore visited the Bay. The name is more likely to have grown from legends with local origin and probably from more than one legend. Robin Hood was the name of an ancient forest spirit similar to Robin Goodfellow and the use of the name for such an elf or spirit was widespread in the country. Many natural features were named after these local folk of legend and, in time, stories crossed over from one legend to another. The traditional anecdotes probably go way back in time but as to their origin - who knows?

What we are more certain of is that in the 18 th century, Robin Hood’s Bay was reportedly the busiest smuggling community on the Yorkshire coast. Its natural isolation, protected by marshy moorland on three sides, offered a natural aid to this well-organised business which, despite its dangers, must have paid better than fishing.

Smuggling at sea was backed up by many on land who were willing to finance and transport contraband. Fisherfolk, farmers clergy and gentry alike were all involved. Fierce battles ensued between smugglers and excise men, both at sea and on land, and Bay wives were known to pour boiling water over excise men from bedroom windows in the narrow alleyways. Hiding places, bolt holes and secret passages abounded. It is said that a bale of silk could pass from the bottom of the village to the top without leaving the houses.

The threat of the excise men was not the only danger to Bayfolk. In the late 18 th century and early 19 th century, the Press Gangs were feared and hated. Sailors and fishermen were supposed to be exempt but, in reality, rarely were. Once ‘pressed’, their chances of returning to their homes were not high. Village women would beat a drum to warn the men folk that the Press Gangs had arrived and it was not unusual for the Press Gang to be attacked and beaten off.

The fishing industry reached its zenith in the mid 19th century and a thriving community existed in Bay. The townsfolk liked to amuse themselves in the winter and there were dances almost every evening.

Church and chapel were well attended and funerals and weddings were occasions for a festival. Like other fishing villages, Bay had its own gansey pattern. From the early 19th century, Robin Hood’s Bay began to attract visitors from the outside and this has continued to the present day.

With grateful thanks to the Fylingdales Local History Group.